Clinical trials can be a trial themselves when researchers are left to find the right candidates. One Research aims to tackle the problem by focusing on communications.

To an outsider, it seems strange that clinical trials that have the potential to advance science and even save lives should struggle to find recruits.

But despite the fact that the very people needed to try out new treatments are those who stand to benefit from them, the pharmaceutical industry has historically found this aspect of its work particularly challenging.

“Twenty per cent of sites looking to trial a new drug end up recruiting no candidates at all, while 70% of trials take longer to find enough people than the programme originally allowed for,” explained Alistair Crombie, managing director of Sussex Innovation Centre-based One Research.

The problem in the past has been that recruiting volunteers to take part in trials has been left to the researchers who are running the trials, and that’s not necessarily where their expertise lies.

“Researchers want to get on with running the trial and disseminating the results,” explained Alistair. “They generally don’t have the resources to get out there and find the right people and in many cases it is not the most effective use of their time.”

Alistair realised in 2009 that the situation would not improve until the industry began placing a greater emphasis on communicating with patients – and that was the inspiration behind setting up One Research, which he now runs with business partner Nick Thomsitt, the company’s operations director. 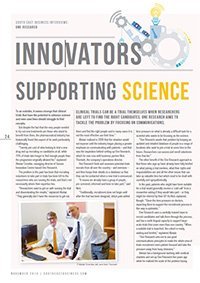